AIMPLAS has consolidated over the last years its firm commitment to environmental sustainability. In this way, the technology centre moves forward in line with the evolution of the market and with the regulation affecting the companies of the plastics industry, thus making it clear in all its areas of activity: from R&D projects, in which it participates, to the Corporate Social Responsibility (CSR) actions that it has intensively fostered during this last year. 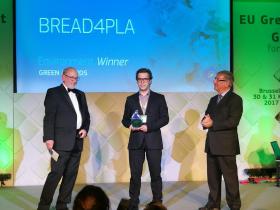 In particular, over the last five years, about one hundred projects related to plastics’ sustainability have been carried out in the amount of 100 million euros.  Some of them have allowed to develop new packaging and printed-film recycling processes, others have achieved to transform biorefinery wastes into bioplastics and even others have made possible to obtain new enamels, resins or materials for the construction sector from multi-layer or coloured PET packages. New repairable, reprocessable and recyclable epoxy resins have also been developed for highly-demanding industries such as the automotive or aeronautical industries.

In 2017, the project BREAD4PLA, which resulted in film for manufacturing new packages for the bakery sector made of bioplastics obtained from the recovery of sliced bread crusts and sponge cake wastes, was awarded at Green Awards, given by the European Commission, in the category of Environment, after being selected as one of the best 15 projects LIFE of the last 25 years.

In 2017, AIMPLAS increased its revenues by 18 % until reaching 9.9 million euros, of which 68 % correspond to R&D projects, 23 % to technical assessment and technological services, 6 % to training and the remaining 3 % to associated companies’ fees.

Regarding projects, last year a total of 145 projects (18 more than in 2016) were carried out, in collaboration with 367 companies, of which they obtained a return of 19.2 million euros. In the case of training, a total of 181 actions were developed. They involved a total of over 3,680 hours and 3,168 participants from more than a thousand companies.

As regards technological services, 2017 represented another achievement for AIMPLAS, since it became the first Spanish laboratory internationally accredited to perform tests in compost biodegradation and plastic materials’ disintegration and odours tests for the automotive sector according to the ISO/IEC 17025 standard. 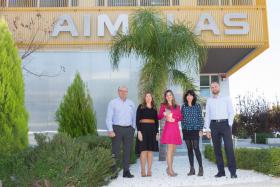 Commitment to society and the environment

The sustainable development and well-being of individuals are among the priorities of AIMPLAS. That is why the centre has joined the United Nations Global Compact, which is the basis for CSR. During 2017, the strategy points were defined and implemented: people, environment, ethic and transparency, the AIMPLAS university chair and the relationship with suppliers.

In recognition of all these actions, in November 2017 the centre was awarded with the prize ‘Ciudad de Paterna’, an award given by Paterna’s city council, in the category of ‘socially-responsible company’.