Categories: Innovation and trends in plastic materials, Nanotechnology applications in the plastics industry 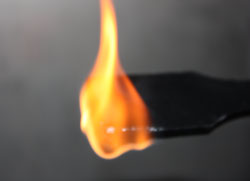 Over the last years, conventional materials are being replaced by synthetic polymers, but most of them are flammable and in presence of a strong heat and oxygen can burn.

The demand on flame retardants has varied over the last years, since besides their effectiveness in case of fire, flame retardant systems must comply with a series of requirements: they must not be toxic, they cannot migrate, they must keep plastic mechanical properties, etc.

In the field of flame retardants, halogenated additives (based on bromine and chlorine organic compounds), have competed traditionally at a disadvantage due to environmental regulations. This fact means that in many applications it is needed the use of non-halogenated additives, such as magnesium hydroxides and aluminium trioxides. However, it is required a high concentration to reach a cooling degree able to inhibit ignition. In case of fire, water, originally incorporated as a hydrate, is released, and the plastic is once again flammable. Another disadvantage is that these additives incorporated in such high percentages affect processability and physical and thermal properties of the material. Apart from those flame retardants already mentioned, it is used antimony trioxide due to its synergic effect with halogenated compounds and other retardants, such as boric acid and phospho-halogenated organic products. Flame retardant systems based on phosphorus hamper the combustion process causing a carbonization in the surface, what protects from subsequent heat effects and interrupts the oxygen supply and so the spread of flames. A mechanism that is considerably more effective than the purely physical water release.

The new generation of flame retardants are called nanomaterials. Most polymeric nanocomposites have particles with a high aspect ratio and specific surface that makes easier the interaction between polymer and particle. By using small quantities (0.5-5 %) properties such as rigidity and thermal resistance may increase and others such as water absorption and gas permeability may decrease.

Over the last years it is being studied the influence of different nanoparticles in the fire performance of plastic materials, both for themselves and in combination with other flame retardant systems, achieving encouraging results. The interest in nanocomposites is focused on the decrease of the ignition timing and dripping elimination, since it is formed a carbon layer or three-dimensional net during the progress of fire, what protects the rest of the material to propagate the fire. A distinction can be made between three types of nanocomposites depending on how many dimensions of the dispersed particles are of the nanometre order. Nano-1D are flat laminated structures, such as nanoclays; Nano-2D are longitudinal structures, such as nanotubes or carbon nanofibers; and Nano-3D are isodimensional nanoparticles, such as silica spherical nanoparticles.

One of the current challenges of nanotechnology is the development of methodologies allowing to obtain nanocomposites with a uniform dispersion degree, as well as a matrix-particle strong bond, a fact that will strongly influence the final properties of nanocomposites.