Categories: Plastics in the automotive and transport industries, Quality control of polymers and plastic products

Within environmental tests, climatic tests use the relevant laboratory equipment to reproduce climatic conditions at which a product may be exposed during its lifetime.

Climatic tests are related to conditions observed in nature:

To develop these tests, the Physical Mechanical Laboratory of AIMPLAS has a total of six climatic chambers, which can be used to carry out an array of tests and investigations at different temperatures and humidity conditions. AIMPLAS has recently acquired new equipment to broaden its scope of services.

Given that different materials respond differently to these changes, this ends up being the ideal method for testing joints between different elements, such as those that are found on soldered electrical components or products with different kinds of polymers which are common in the automotive sector.

In some applications, such as aeronautics or defence, the aim of the machine is not so much about testing the joint between two materials, but rather reproducing a realistic product scenario (ground to air or air to ground undergo large changes in temperature in seconds).

The chamber comprises two compartments in which the samples can be moved vertically. The temperature changes occur in less than three seconds through a lift with a stainless-steel tray. 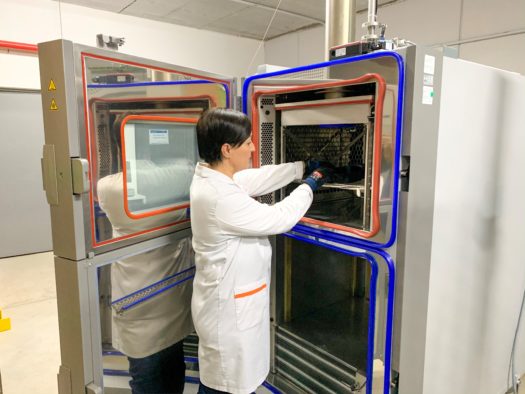 With all of this equipment, AIMPLAS is situated at the forefront to take on new challenges in the field of climatic tests. If you would like us to perform environmental tests, please contact us.