Categories: Circular economy in the plastics industry, Innovation and trends in plastic materials, Plastics in healthcare

We have all heard about excessive emissions of CO2, a gas that is absolutely necessary for life on Earth, but that in high concentrations causes a relentless increase in the greenhouse effect. In fact, a link between CO2 emission into the atmosphere and the global temperature increase since the days of the Industrial Revolution from the second half of the 18th century has been clearly demonstrated. Then, from these facts, terrible scenarios proportional to the increase in temperature are described. We are at 1.1ºC, and the limit is assured at 2.0. This is the starting point for a whole series of unpredictable phenomena that can range from the floods of major coastal cities (London, New York, Barcelona, Shanghai, Tokyo), to the massive extinction of animal and plant species, unacceptable scenarios from any point of view. 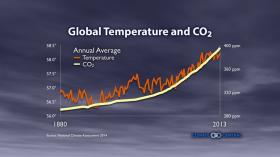 The facts are there, and it is unavoidable to fight against this growing process by effectively reducing CO2 emissions into the atmosphere. The source of this excess is enormously varied, difficult to control and very dependent on our current ‘way of life’, hence the complexity of correcting and redirecting the problem.  There is CO2 in our cities, means of transport based on combustion technologies, heating appliances, shops, etc. but mainly in the industry (steel sector, power plants and cement companies). The data are indisputable: CO2 contributes more than 60 % to the greenhouse effect, and we have the highest concentration of the last 650,000 years when the volcanic activity of our planet was in all its fullness. 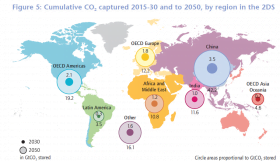 The mitigation of emissions, the modification of production systems and their improvement is a non-negotiable condition to reverse the current and future situation. However, I am convinced that the world of plastics, whose production is also responsible for the current emissions, can provide a wide range of solutions that significantly reduce the persistence of CO2 in the atmosphere. Indirectly, the sustainable implementation of electric means of transport and green and sustainable construction clearly requires developing plastic materials with new functionalities. Improvements in insulation, batteries, weight reduction and smart actuation systems are good examples. Directly, plastics have much to say in improving the current ineffective CO2 capture and storage methodologies.

Carbon capture and storage (CCS) is one of the few options aimed at drastically reducing CO2 emissions into the atmosphere and is a measure enhanced in Europe at all levels in order to meet the CO2 reduction objectives defined at the International Climate Change Conference held in Paris in 2015. There are clearly defined intentions in these meetings: stabilisation of CO2 concentrations at 450 ppm, equivalent to a balanced global temperature increase of around 2°C, a reduction in emissions of up to 85 % by 2050, as well as a reduction of up to 5Gt per year. It is clear that most industrialised countries must make the greatest effort.

Now, let’s talk about technology. The principles of CO2 capture and storage are based on materials that collect the gas produced directly from the chimneys of the industrial production during the different combustion processes. This capture process involves the efficient separation of CO2 itself from other gases such as water vapour, nitrogen and even pollutants such as sulphur oxides or the feared NOx. The interesting point is to think about how polymers can contribute to efficient capture. In order to do this, we must take into account the most classical and implemented solutions. Among them, liquid amines have a great power of CO2 chemisorption. They are very active and very efficient. However, this CO2 must then be removed in order to be stored. And nowadays, that means a great waste of energy, what we call the ‘regeneration of an adsorbent’. How do you do this? Traditionally, we do it with temperature (TSA) or pressure (PSA).

The other great classical adsorbent is activated carbon. Although it does not have as many energy requirements for desorption/regeneration, the amount or efficiency of adsorption can be greatly improved and new solutions for CO2 capture are needed. New generations of adsorbents are being developed, such as technologies based on graphene modified with polymers such as polyethyleneimine, which clearly increases. However, the energy barrier that desorption represents is always there. The good news is that these technologies are extremely selective for CO2, resulting in a gas of extreme purity. Another very interesting technology is the use of separation membranes. We are working on materials such as polysulfones, cellulose acetates, PTMSP or polyamides doped with other advanced materials such as graphene or MOFs. The membranes do not need regeneration or desorption, as they only separate and this is very promising from the energy and economic point of view. Nevertheless, the purity and selectivity of CO2 are not so remarkable, in other words, it is poor, mainly when working with gases in very low and diluted concentrations. This leads us to the point in which no solution is perfect, but they do complement each other perfectly. The most potential solution right now is to work with hybrid prototypes that combine solid adsorbents and membranes, thus getting the best of both worlds and looking for potential synergistic effects.

On the one hand, what is the long-term goal? Low concentrations. So far these capture systems are very effective in high concentration and pressure gas systems, in other words, directly connected to the chimney. The future is clear: to increase more and more the effectiveness to be able to work with very diluted gases. As mentioned, the industry is a part of the problem, but not the only one. Let’s imagine that adsorbers are used in renewable plastic paints in public buildings and highly polluted cities, in garages, cars, pavements, advertising panels or adsorbent roads. Thousands of solutions that are part of the so-called ‘fourth generation of adsorbents’, or atmospheric CO2 purifiers. It is the future we long for.

The next step is the most controversial and critical. We already have CO2 captured, separated, desorbed and something must be done with it. At least, it must be pressurised and stored. On the one hand, these stages represent the greatest energy expenditure for the whole process and it is possibly the reason why some solutions are not profitable or absolutely outdated. On the other hand, storing CO2 and injecting it directly into the soil does not seem like a solution, but honestly, a problem delayed. It’s like sweeping and hiding dirt under the carpet. It sounds like ‘fracking’ or ‘nuclear waste storing’. It is said that it is not dangerous, that such CO2 can be used afterwards. It is not interesting. Promising solutions are based on the study of very porous rocks that increase the efficiency of such storage, or even the injection into strata sensitive to carbonation. This involves the reaction of CO2 with the material of these rocks to obtain new minerals similar to calcium carbonates or talc, used in the industry for other purposes. The possibility of using the CO2 captured to feed vegetables, such as large algae farms, has also been considered.

All this is CCS (carbon capture and storage), but other solutions may involve changing the word ‘storage’ for ‘use’; they are called CCU technologies: (CO2 capture and utilisation). Many researchers, engineers, and even active policies are in favour of this perspective. It is not a matter of storing, of saving CO2, but of giving it a use of great added value for the industry and, obviously, for our society. The most advanced technologies refer to using CO2 as a source of synthesis, chemical reactions to obtain useful and interesting industrial chemicals. They include the production of biofuels, such as bioethanol, to be used in energy production, thus significantly reducing the carbon footprint of the entire process, but also fine chemistry, which has an important role in this process of CO2 use. Important projects for the development of more complex chemical compounds such as fertilisers, polymers and plastics have a great future. Bioplastics such as polycarbonates, polyesters or bio-polyurethanes can be perfectly synthesized from the CO2 captured in industrial processes. The main problem with all these technologies lies precisely in chemistry. CO2, for better or worse, is a highly stable molecule. That is, it needs a lot of energy to be reduced and to interact with other reaction intermediaries to obtain both biofuels and advanced plastics and, of course, there is no energy excess, which is precisely what we are trying to combat the most. There are very interesting solutions. For instance, reduction processes based on electrochemical processes and photocatalysis using solar energy to reduce the energy barrier are providing excellent results. The technology for obtaining bioplastics requires catalysts to limit temperatures and reaction times. Graphene or MOFs (metal organic frameworks), for example, have a significant role to play in the synthesis of cheap, totally sustainable and energy-efficient bioplastics. 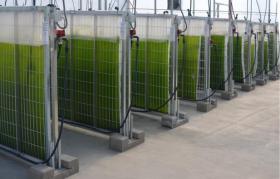 We have already talked about many ways and technologies that can solve the problem of greenhouse gas build-up. There is no possible competition between them. In fact, there are many public voices that say without mercy that CO2 capture will not be the solution to climate change and talk about the limited usefulness of these negative emission technologies. It is true, they are not reinventing the wheel; we do not have before us Aladdin’s magic lamp, but we do have an important gear that little by little must impose its firm contribution to emission reduction. Separately, they are not the holy grail, but together, it is another story.