›Blog
›Innovation and trends in bioplastics
›Composites and fire: developments and new trends in flame-retardant additives
2019/01/15

Composites and fire: developments and new trends in flame-retardant additives

The consumption of fibre reinforced plastics (FRPs) is experiencing a continuous increase in a wide range of applications and sectors. This is due to their good mechanical properties (high stiffness, strength and toughness), low weight, corrosion resistance and low cost. Long-fibre composite materials are based on a homogeneous matrix and a fibre reinforcement that can have different formats (fabric, yarns, mats, etc.).

The fibres used as reinforcements are generally glass, carbon or natural fibres, such as flax, jute, kenaf or hemp, among others. The fibre is impregnated by the matrix, which transfers the fillers to the fibres and protects fibres from mechanical abrasion and environmental attack.

Between 35 % and 40 % of FRPs are usually manufactured with thermoplastic matrices, while the rest is composed of thermosetting matrices. Thermoplastic matrix-based composites are becoming more and more interesting, but their processing difficulties causes limitations in their use.

Therefore, many industrial sectors use thermosetting-matrix composite materials to meet the requirements demanded by the electronic, aeronautic, automotive, railway and wind power sectors, among others, at competitive costs. In order to meet all the variety of requirements demanded by the industry, a wide variety of thermosetting resins has been developed and introduced on the market, which is mainly based on unsaturated polyesters, vinylesters, phenol-formaldehyde oligomers, benzoxazines, cyanate esters, polyimides, epoxies and their mixtures. Thus, the versatility offered by all these types of resins and additives available in the market allows obtaining a large number of formulations. Additionally, the combination of resins with different types of reinforcements allows the design of multiple tailor-made systems for various fields of application.

However, the use of composite materials is not suitable for all applications. One of the greatest challenges faced by FRPs in high-performance applications is its fire behaviour.  When polymeric composites are exposed to high temperatures, they may undergo chemical decomposition or pyrolysis, and the resulting products may react with atmospheric oxygen during combustion.

The flammability process consists of five fundamental stages: heating, decomposition, ignition, combustion and propagation. Figure 1 shows the combustion cycle of a polymeric material, with the factors affecting its maintenance. 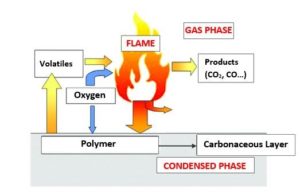 The reactive FRs are usually introduced into polymers during polymerization (as

monomers or precursor polymers) or in a post reaction process (e.g. via chemical grafting). These flame retardants chemically bond to the polymer backbone. However, the addition of these additives to the matrix involves a more complex procedure.

On the other hand, the additive FRs are generally incorporated during the transformation process of the polymer systems and do not react at this stage with the polymer but only at higher temperature, at the start of a fire This form is the simplest and most economical way of providing flame retardancy to composites and is, therefore, the most widely used form. However, it is important to consider that this method has certain disadvantages such as compatibility between the additive and the matrix, and the possible decrease in the mechanical properties of the polymer.

A Flame Retardant (FR) is an additive capable of modifying, reducing, delaying or even stopping the combustion process of materials. In this way, the main function of a flame retardant is to increase the escape time and, therefore, the response time to fight the fire and increase safety.

Figure 2. Comparative chart of escape time in formulations with and without flame retardancy.

Table 1 shows a summary of the main action mechanisms and the main types of flame retardants in each family. 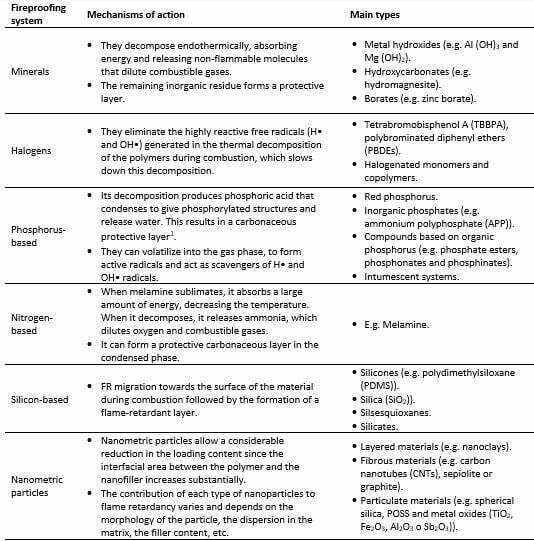 Table 1. List of the main flame-retardants families, the mechanisms of action and the application systems.

Another type of combination of components to achieve flame retardancy in polymeric materials are the so-called intumescent systems. They are based on the formation of an expanded carbonized layer on the surface of the polymer during thermal degradation. This layer acts as an insulating barrier, reducing heat transfer between the heat source and the polymer surface. It also limits fuel transfer from the polymer towards the flame as well as the diffusion of oxygen into the material. The formulation of an intumescent system consists of three components: (i) an acid source (phosphoric acid, sulphuric acid, boric acid, ammonium salts, amine or amide phosphates, organophosphate compounds), (ii) a carbonising agent (usually a carbohydrate, e.g. starch, dextrins, sorbitol, mannitol, etc.) and (iii) a blowing agent (urea, melamine, polyamides, urea-formaldehyde resins, etc.). These systems can be used in many polymers such as polyamides, polyesters, polyolefins, epoxies and styrenes. The new intumescent systems are also an example of the synergistic effect against fire by combining different FRs.

Among all the retardants currently on the market, it has been shown that the best fire retardancy properties are obtained with halogenated additives. These additives had constituted the majority of flame-retardant solutions until new environmental directives such as REACH, WEEE and RoHS appeared, which currently restrict their use. This is due to the adverse effects they produce on both the organism and the environment, including toxicity, bioaccumulation, persistence in the organism and long-range transfer through the food chain. Therefore, new trends in flame retardant additivation are based on the use of non-halogenated substances.

Among non-halogenated flame retardants, alumina trihydrate (ATH or Al(OH)3) is the most widely used flame retardant, which together with other metal hydroxides such as magnesium and phosphorus-based additives accounts for almost half of the market weight (see Figure 3). Phosphorus-based flame retardants are expected to continue to account for one of the fastest market gains, as they have been shown to be one of the best substitutes for halogenated FRs by both cost and final performance. In addition, other FRs such as melamine will also continue to experience continued growth. 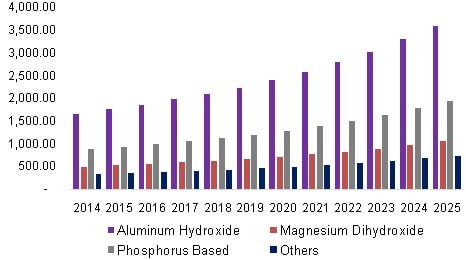 In addition to the great investment that is being made in the development of eco-friendly flame-retardant additives, work is also increasingly being done on the use of bioresins and/or natural fibres to produce more sustainable composite materials. These are called biocomposites, in which at least one of the components (matrix or reinforcement) has a biological origin.

However, the main challenge that biocomposites must overcome, both bioresins (as with traditional resins) and natural fibres, is flammability during its use. In order to meet the strict safety requirements and regulations of some sectors such as the transport or construction industries (UNE-EN 45545, intended for the railway sector or UNE-EN 13501-1, intended for the construction sector), flame retardancy properties must be improved while maintaining other important characteristics such as mechanical and thermal properties and consider other issues such as health risks, environmental risks, water treatment and recycling.

For this reason, new eco-friendly composite materials with fire-retardancy properties are required in the industry, using bio-based materials and halogen-free FR systems. To this end, the Plastics Technology Centre (AIMPLAS) is developing different European and national R&D&I projects that attempt to solve this challenge in the composites sector.

On the other hand, AIMPLAS worked together with the Textile Research Institute (AITEX) on the PYROS project, a project funded by the Valencian Institute of Business Competitiveness (IVACE) and ERDF funds addressed to technology centres of the region of Valencia. Its main objective was the development of sustainable composite materials with high fire resistance for technical applications in the public transport and construction markets. An essential aspect in PYROS was to achieve improved fire properties by using non-halogenated flame retardants.

In order to obtain an adequate flame retardancy in composites, in addition to the morphology and percentage of the FR used in the resin, the adequate and homogeneous dispersion of the additives in the polymeric matrix is a key factor. Therefore, it is important to study the most suitable dispersion techniques depending on the polymer mixture. The dispersion technique will depend on the viscosity of the mixture, which is related to the nature of the polymer (thermoplastic or thermosetting), and the size of the particle to be dispersed (see Figure 5). Moreover, additional additives may be added to improve polymer/filler compatibility.

Finally, we conclude that obtaining polymeric composite materials with good flame-retardant properties is still considered a technological challenge in the composites sector. In order to address the developments and new trends in the production of fire-resistant composites, AIMPLAS plans to hold a conference focusing on composites and fire next April 2019. During the conference, there will be an opportunity for companies, research centres and universities to discuss this subject in depth, reviewing the requirements and regulations required for the final application of composite materials, mainly around the transport and construction sector.