Categories: Circular economy in the plastics industry, Developments and trends in plastics recycling

The RepescaPlas project has ended its third year with a total of 4,218 kg of marine litter recovered from the ports of Marín in Galicia, La Restinga in El Hierro and Gandia in Valencia by fishermen’s guilds and associations.

As in previous years, the items recovered were classified by marine litter type using the MARNOBA platform at the ports themselves. Samples of the most abundant type, i.e. plastics, were sent to AIMPLAS to be categorized by the nature of the materials and to gain more knowledge about the plastics found, and to the Universidade de Vigo for toxicological analysis. The routes taken by the boats that delivered most marine litter to the port were monitored to allow the Asociación Vertidos Cero (Zero Waste Association) to draw up a map of the areas where this litter is being recovered and to establish the litter density (items/km2). 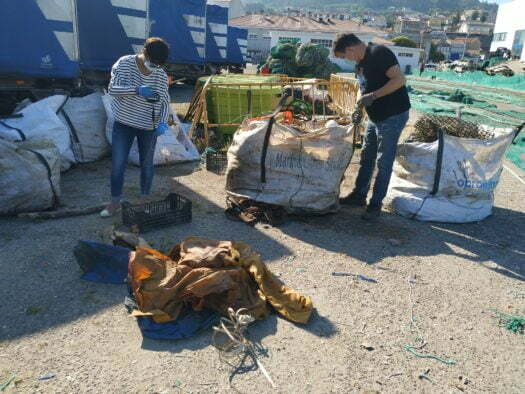 The samples received by AIMPLAS, most of which consisted of PET and low-density polyethylene, have helped the institute make progress towards the development of technologies to recover these materials and convert them into new resources, despite their extreme damage from exposure to the marine environment and the difficulty of reintroducing them into the value chain through mechanical recycling. To that end, the items were initially classified using optical sorting equipment before undergoing a pyrolysis process. This resulted in a solid fraction suitable for the synthesis of activated carbon or lampblack and a liquid fraction whose composition allowed it to be recovered as a fuel and thus used on the fishing vessels themselves. This pyrolysis liquid can be subjected to different chemical processes to obtain monomers of particular interest to the plastics industry.

Meanwhile, the Universidade de Vigo carried out a toxicological analysis in which two versions of the same product, one new and one recovered from the sea, were compared. The results did not detect toxicity levels for any of the marine organisms that usually come into contact with this waste.

The RepescaPlas project is being carried out with the collaboration of the Biodiversity Foundation and the Ministry for the Ecological Transition and the Demographic Challenge through the Pleamar programme and involves the participation of AIMPLAS, the Asociación Vertidos Cero, the Fishermen’s Association of Gandia, the Fishermen’s Association of la Restinga, the Valenciaport Foundation, the Port of Marín and the Universidade de Vigo. It is co-funded by the Spanish Federation of Municipalities and Provinces (FEMP).