AIMPLAS coordinates the European project GRAMOFON, which started on October 2016 and will end in 2020. With a budget of EUR 4.2 million, it gathers a total of nine companies, technology centres and universities, with the aim of developing an innovative CO2 capturing process on new nanomaterials and microwave energy allowing to combat climate change at a lower cost, compared with the cost of current technologies. 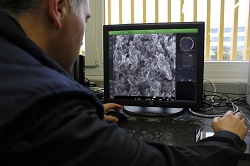 This carbon capturing and storing technology has already been used in the European Union significantly and efficiently in order to reach the emission reduction targets of greenhouse gases. In fact, it has an emission reduction potential from industries of 90 %, which is very valuable in the fight against climate change.

The existing technology consists of the capture and modification of these gases, in such a way as its underground storage is safe. The proposal of the GRAMOFON consortium partners is to achieve a new efficient and low-cost process by using new nanostructured materials to capture CO2, as well as microwave energy for the extraction and subsequent use.

This project has received funding from the European Union’s Horizon 2020 research and innovation programme under grant agreement No GA727619.

Coordinated by AIMPLAS and in cooperation with the project, other centres take part: the technology centre CNRS (France), the University of Mons (Belgium), the centre Fraunhofer ICT (Germany), the company Graphenea (Spain), the centre Process Design Centre (the Netherlands), e2v (United Kingdom), MOFTech (Ireland) and the Korea University of Science and Technology (South Korea).