Categories: Innovation and trends in plastic materials, Plastics for the packaging industry

The NEMOSINE Project, coordinated by AIMPLAS, has come to an end after four years of research to find a more efficient and sustainable storage solution to preserve 20th-century cultural heritage made of cellulose, including film and photos containing this chemically unstable material, which poses a threat to long-term preservation. The project successfully created smart packaging that extends the life and improves the preservation of these valuable cultural items and helps reduce the energy consumption and costs of traditional storage systems (usually based on cold storage below 5ºC).

The new system consists of packaging containing material that adsorbs acetic acid released by the cellulose, sensors that detect acetic acid and nitrogen dioxide, and software to monitor these emissions and generate a degradation model for decision-making on preservation. 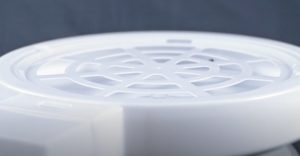 The NEMOSINE box is made of polypropylene due to its chemical resistance, stability and water vapour barrier effect, which makes it suitable for injection moulding, and due to its price, a key factor in terms of the scalability and marketing of this innovative solution. The box was subjected to extensive characterization analysis to ensure its functionality and safety for preserving cultural material.

Acetic acid adsorbents were developed to inhibit the degradation caused by what is known as the vinegar syndrome, a process that threatens the preservation of materials derived from cellulose. These adsorbents are based on metal organic frameworks (MOFs), a porous nanomaterial that is able to adsorb acetic acid under moisture conditions, as in the case of cultural heritage with cellulose derivatives.

For easier handling, these adsorbents are included in a packaging mesh in the form of granules in sealed sachets of Tyvek, a 100% synthetic material made of high-density polyethylene fibres. Test results indicate that these adsorbents are effective, mechanically stable and have high adsorption capacity. To prevent fungal contamination, this mesh can be filled with silica gel sachets to dry the damaged material first and then MOF sachets can be installed. 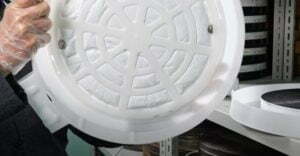 Low-cost, low-energy solution to detect, monitor and fight against degradation

The NEMOSINE Project also involved the creation of a sensor system to detect acetic acid and nitrogen dioxide gases, and thus provide a low-cost, low-energy solution to monitor the degradation of these materials. In addition, a graphical interface was developed to provide users with access to raw data and extracts with simple data communication via a cordless Internet connection. To monitor the degradation process, the NEMOSINE software includes a degradation model with data on gases emitted as collected by the sensors and metadata entered by users.

The project thus managed to develop a new methodology for assessing the degradation status of historical films, and to determine the effect of each parameter (e.g. relative temperature, humidity and presence of adsorbents) on the material’s life. This tool provides curators with a valuable guide to the best preservation actions based on predictions that can help save energy and extend preservation times. Thanks to the smart packaging’s modular format, sensors can be also used for environmental control, since they are separate from the box.

New packages will allow to preserve films, photographs and records for longer