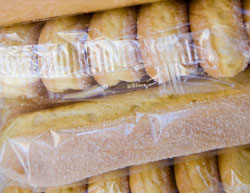 AIMPLAS will contribute with its experience, acquired in more than 25 years working on innovative projects, focused on the increase of food’s shelf life and the use of food wastes to produce packages

AIMPLAS, Plastics Technology Centre, has joined as a new member the initiative SAVE FOOD, driven by FAOM, PNUMA and Messe Düsseldorf in order to avoid food waste. More than 120 companies and bodies are currently part of this initiative that deals with the world food losses as one of the most urgent problems in the international community.

Among the objectives of SAVE FOOD we can stress the awareness of the industry in order to avoid the loss of food. AIMPLAS can contribute to this project with its more than 25 years of experience in the development of plastic materials for packages that make longer the shelf life of food and contributing with important improvements in conservation and distribution of them.

Thanks to its integration in SAVE FOOD, AIMPLAS hopes be able to contribute to the development of solutions in the food’s value chain with the interaction and dialogue with other agents of economy, politics and investigation. Besides, the technology centre could be up to date with the most recent researches and the best practices when fighting against waste of food, so that it can focus better its efforts in investigation.

AIMPLAS has a wide experience in the development of R&D and innovation projects related to the exploitation of the wastes of food industry and the development of packages for make longer the shelf life of food. SAVE FOOD is a platform that will allow the promotion of these projects in order to make known both to industry and consumers and aware to all the agents to move forward in the reduction of food wastes.

Concretely, AIMPLAS have been working for 25 years in the development of materials with high barrier properties, intelligent packagings that notify the state of the product through labels, RFID or functional printing and also active packagings (antimicrobial, antioxidant, oxygen scavenging, ethylene and water vapour, etc.)

Other packaging investigation lines of AIMPLAS are those that have allowed the development of multilayer structures, including innovative processes such as coinjection, which also proportionate a barrier against oxygen. Or those who combine different packaging technologies, such as perforation or laser microperforation and the modified atmosphere packaging.

The exploitation of wastes and subproducts of the agricultural industry for obtaining bioplastics used in the development of packagings complete the know how that AIMPLAS can contribute with to SAVE FOOD.

About ten R&D and innovation projects in the curriculum

PHBOTTLE is one of these projects. It has been developed together with AINIA and its objective has been obtaining a new package for juices, biodegradable and with antioxidant properties (that make longer the shelf life of the food inside) manufactured made from sugars and other wastes which are rich in carbon, nitrogen and oxygen that we find in sewage water of industries of juice themselves.

In the same line has been developed BREAD4PLA, a European project funded by EU’s Life+ program in order to manufacture biodegradable packagings for bread and pastries with the wastes made by the bread industry itself with the pieces of bun and the crust of sliced bread. The results are plastic packagings that are not needed to be separated from organic waste, because of in composting conditions they are turned into fertilizer.

AIMPLAS, also together with AINIA, has developed another LIFE+ European project called WHEYPACK and whose main objective is to prove that it can be manufactured a new packaging for milk products with 100% biodegradable materials that allow a lower environmental impact and the decrease of the carbon footprint in traditional plastic packagings using the excess of whey from the manufacture of cheese to generate the new material of the packaging.

In order to make longer the shelf life of food, AIMPLAS has carried out projects such as PLA4FOOD, which has allowed the development of trays and plastic bags manufactured with materials from renewable sources (PLA or polylactic acid). Some additives with natural extracts have been put on these packagings, concretely with encapsulated molecules of garlic that release, in a controlled way, their antioxidant, antimicrobial and antifungal properties once they have brought in contact with the food. This has allowed an increase of the shelf life of food over the 15 %.

In the case of the project NATAL, it has been achieved a prolongation of the time that food remain in good conditions after adding extracts of agro-industrial wastes (grape, garlic, onion, tomato, pepper and olive) to food plastic packagings so varied as fishes, cheeses, sausages, red meat, fruits and vegetables, while the projects NATENVAS and ENVAFUNG have developed specific packagings for strawberries and cheeses and for bakery products, respectively.

AIMPLAS have also developed a wide experience through projects like C-CALPE by using barrier-to-oxygen materials. In this case, they have been created tray-typed packagings composed by various layers of materials to avoid that gases such as oxygen bring in contact with food. The innovation is that a part of the materials used are water-soluble, which makes easy the recycling of the rest of components. In this working line, but focused on precooked dishes, it has been carried out COBAPACK, a project where it has been used a new technology based on coinjection and where it have been used renewable materials such as starch as a barrier in order to make longer the shelf life of food.