During 2015, AIMPLAS has taken part in 123 R&D projects. These projects involve mainly sectors such as packaging, automotive and transport, construction, environment and recycling, electrical-electronic and aeronautics. A total of 227 companies, of which 183 are SME, have taken part together with AIMPLAS in the development of such projects. These R&D performances generated a return of 12.6 million euros for the companies involved.

The year when AIMPLAS celebrated its 25th anniversary, it has exceeded the 2 000 customer companies and has increased its income up to 8.7 million euros. As a technology partner, AIMPLAS has worked together with these companies when carrying out these R&D projects, representing a 71 % of the total invoice, as well as the implementation of technical assessment services, analysis and testing (18 %) or training activities (6 %). The number of associated companies has also remained on an upward trend up to 554 associated companies. 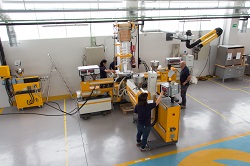 A total of 120 professionals work in AIMPLAS in areas related to R&D, but also providing other services, such as technical assessments, analysis and testing and training to other companies of the plastics industry. AIMPLAS has currently an analysis and testing laboratory that makes it the Spanish technology centre with higher number of tests on plastics accredited by ENAC (Spanish National Accreditation Body). During the last financial year, more than 6 500 technology services were developed and 158 training activities were organised, where 2 518 attendees from 889 companies got 3 963 training hours.

AIMPLAS is also a powerful ally in the plastics industry thanks to its Plastics Observatory. Its own technology watch and competitive intelligence system give access to high-added-value information to help companies of the sector when making decisions. In 2015, the Plastic Observatory achieved 3 812 users.

AIMPLAS’ turnover growth has been linked to an expansion of both its facilities and services. In the case of its pilot plant, the centre has currently more than 2 000m2 of facilities, being the best equipped centre in plastic processing technologies at a national level and an international reference point in plastic materials and processing techniques. In 2015, a new filaments extrusion line has been incorporated to this plant’s equipment to print parts by means of 3D printing. Thanks to that, the technology centre incorporates new methods to carry out R&D projects, such as modifying materials to get functional properties (conductivity, solubility, antimicrobial, etc.)

For the Plastics Technology Centre, 2015 has been also the year of consolidation of MeetingPack, the international event organised together with AINIA that has turned into an unavoidable date in the packaging sector at an international level. In its second edition, dedicated to materials and barrier packages, the meeting exceeded the capacity expectations and surpassed the 300 attendees from all the packaging industry value chain.