Categories: Circular economy in the plastics industry, Innovation and trends in bioplastics, Plastics in the automotive and transport industries

AIMPLAS has finished the European project BRIGIT after 48 months of research. In the project, 15 partners including the University of Cantabria and the Spanish company Green Source S.A. Thanks to these researches, it has been obtained a new generation of fire resistant panels for trucks and buses manufactured from biopolymers from by-products from the cellulose paste manufacturing for the paper industry. 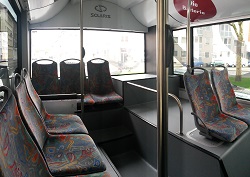 The project BRIGIT (Seventh Framework Programme grant agreement no KBBE-2012-6-311935) began in August 2012. During its performance, different subjects have been tackled, from the obtaining of biopolymers, their formulation and modification to improve the fire behaviour to the processing of the resulting biocomposites for panel manufacturing, which were installed inside trucks and buses from Solaris and Fiat. Moreover, the economic and environmental viability of the new products has been validated.

In order to get these innovative panels, the partners of the project developed a new process to obtain bioplastics, in particular PHB (polyhydroxybutyrate) and PBS (polybutylene succinate), more ecologic than the existing ones. They are obtained from by-products from the cellulose production. As the main project researcher, Miguel Ángel Valera, says “the use of by-products from the cellulose manufacturing process as source of sugars needed to carry out the fermentation process of the microorganisms producing PHB and succinate acid, it allows an integration of the processes needed to obtain the biopolymers used in BRIGIT, therefore we get a saving in manufacturing costs.

By means of compounding techniques, AIMPLAS mixed and modified both biopolymers to obtain a biocomposite with strict requirements. Firstly, it is a processable material by means of extrusion, with the mechanical and fire resistance that the transports industry demands, but with the advantage of being fully biodegradable and also compostable after its grinding, in contrast with the thermosetting resins currently used.

Secondly, by means of continuous compression moulding the multilayer panels formed by biocomposite sheets and natural fibres (replacing the usual glass fibre) and a light cork core inside have been manufactured. In addition to be installed inside trucks and buses as columns and side panels, these 3D panels could be also used in trains, ships, vans and other means of transport of goods and people.

The current research lines on biopolymers and the innovations of the main companies of the sector will be in the VI edition of the International Seminar on Biopolymers and Sustainable Composites www.biopolymersmeeting.com/en , organized by AIMPLAS and held on 1-2 March.