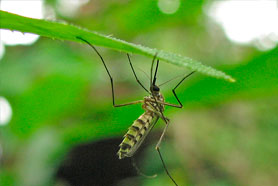 Thanks to its expertise with thermoplastic materials, AIMPLAS has been able to obtain plastic articles which can release insecticides at a controlled rate for a long period of time.

The most important challenge in this work was to preserve the integrity of the active substances during the fabrication of the finish products to warrant the controlled and long-term release at the time they reach the end-user.
For this purpose, a new methodology was developed to incorporate the repellents and biocides into plastics preventing them to degrade as consequence of the high temperatures (around 200ºC) that the material is subjected during the transformation processes. This new technology consists in the encapsulation of the active substances. By doing this the release rate is also controlled, prolonging the lifetime of the final product, this way while more insecticide or repellent is incorporated into the carrier, longer is the duration of the effect.

As the final product developed was a masterbatch (MB), this new additivation can be applied to hundred of plastic products.
AIMPLAS developed this new MB for plastic bags, although this technology can also be applied to other type of articles such as nets, garbage containers, garden furniture, and pipes, among others. The insecticides can even be substituted by other substances like fragrances, obtaining a whole different functionality or even another insecticides or repellents for rodents etc.

The method developed by AIMPLAS is also valid for obtaining yarn and raffia, giving place to fabrics with insecticide capacity. These fabrics can have different release rates as well as more or less durability of the effect. Potential applications of these materials include professional clothing and for emergency situations such as earthquakes and refugee camps among others, also in camping tents, raffia canvas, etc.

According to Luis Roca, responsible for compounding in AIMPLAS, “the technique developed in the project allows to greatly customize insecticide properties of plastic articles, adapting its duration and optimizing its effect”.